The majority of what I photograph is often set up and planned out, but while shooting a 1950s Pontiac for stock work, I had a smart car pull up right in front and found the placement,color and timing to be perfect. Also the gas station in the back added a nice touch (unfortunately gas is up to $4.20 now).

Back on the Road for AdvoCare’s Impact Magazine

Architectural Series While on the Road

Here are two images from a recent photo shoot done in the studio for HoraceHugh.

A few months back I had the opportunity to photograph Steve Weatherford of the New York Giants in the studio. The lighting above is fairly simple with just a beauty dish off to the side.  The client later changed the background to blue for the cover.

This closeup of Steve with the helmet was taken using a ring flash to eliminate any shadows from the helmet and create a unique catch light in his eyes. A few effects were then added after the fact to create a retro look to the image.

Here are two more images taken during the same photo shoot. By planning out the lighting and backgrounds in advance, we were able to get quite a few variations despite only having a two hour window of time.

Photo Shoot for Kellogg School of Science and Technology

This is a montage from a day of location shooting at the Kellogg School of Science and Technology. Their campus is spread out between multiple buildings, so there was a lot of set up and tear down throughout the day.

A Few Snaps While Traveling on the Road

I recently did a photo shoot with the goal to create the look of a young boy hitting a baseball through the window. This image was created using 3 different photographs. The first image of the boy was taken from a high angle and then I had him hold the ball attached to a metal stick for the second shot to make sure the lighting matched. The glass was then later photographed on a white sheet of paper and then blended into the background layer using an effect called “screen” in Photoshop.

Working for Vigor Systems Inc. this week in La Jolla, CA – I would have preferred they bring their product into the studio where I knew I would have full access to anything and everything I needed, but the servers we were photographing were in use and could not be offline for a long period of time. The client wanted a specific angle and early on I realized there were going to be a lot of challenges with the servers highly reflective surface. 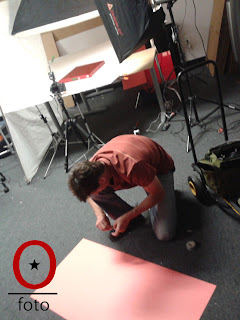 With the help of the client we found a store close by that sold large sheets of red paper and I had my assistant tape them together and hold them behind the product, in effect bouncing the red into the top of the server. Below is the end result.

Skip O’Donnell is a commercial photographer in San Diego California who specializes in people, food and product photography.

Welcome to the world of professional product photo